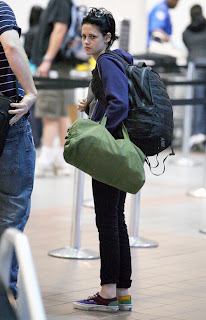 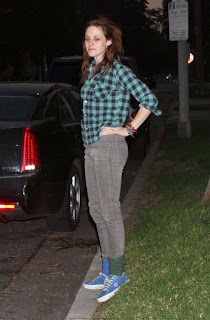 vans are omnipresent at the moment & there's countless celebrities who walk the waffle sole including the (dis)likes of kanye & rhianna. to spot a celebrity in original vans is somewhat more challenging however, not that i had searched with any real motivation (until this post) but unless someone is wearing a well recognised original, or wearing vans pre-1995 it is difficult to 'spot a native' american made van.

this blog was flooded over 1 year ago when some scary kristen stewart stalkers had spotted her in an original disney style #44 & permalinked us. further investigation revealed the young actress has a favouring for originals! here you can see her sporting asymmetrical socks with a classic 90's square root sid model, & a fresh 4-tone style #95. the highlight was her mickey mouse #44 spotted on set while filming some years ago. not condoning the type of obsession given to kristen online by fashion-mongers (by the way these are not vault!), but she does wear her originals well. that said i might just have to do some digging (in her trash), find her shoe size & do some shameless twitter stalkage. 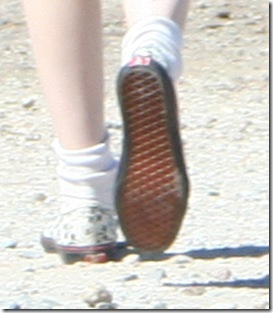 that was to be the end of this post until i remebered the music vid of talking heads my friend sent my waY(ne). it turns out that david byrne is sadly not in fact wearing original #44's as he walks on stage at the intro to psycho killer. that will not prevent me from posting the intro to what could arguably be the best live band film of all time?! & this was where this style profile itslef did 'stop making sense' as i uncovered the most weird of original vans celebrity. psycho killer! 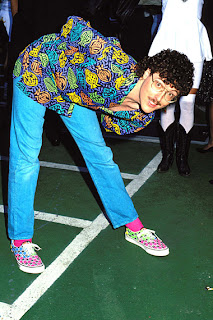 i reblogged this image on tumblr recently (via classickicksnyc & originally wearestudied) & thought.... damn they look like custom MTV #95's! the moment passed like tumblr weed in the draft of instagram until today. i google imaged mister weird al yankovic, known for his garish attire, satire & vans! i was stoked to uncover 1st a record cover complete with custom tropical print style #98 similar to that about to be re-issued by vans this summer.... & then to uncover the following, after the leap of faith. 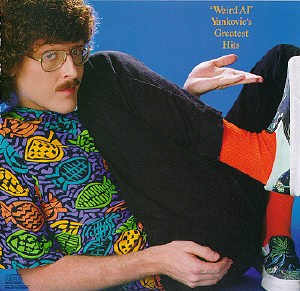 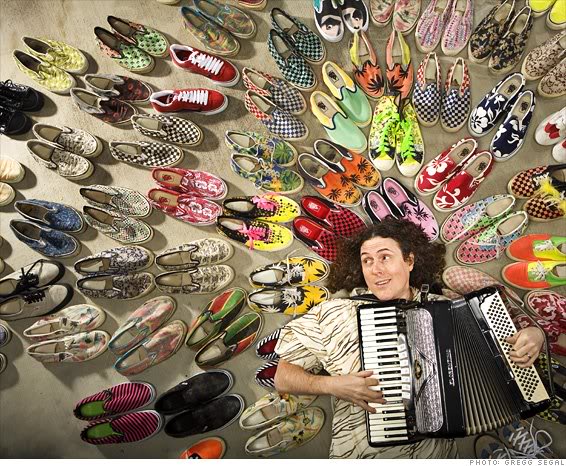 weird al is a vans head, with 1 of the best collections i've seen, most of which are originals! he did this true obsessions bit for cnn money back in 2009 exhibiting that it's vans that strikes an accordion with him. he seems to be mostly a slip-on man but does have some #95's & hi-tops, but his style is defiantly off the wall! he's got checkerboard, pirate skulls, several island beach, 2-tone, 3-tone, 4-tone & some unintelligible uppers, downers, screamers, laughers & yes indeed some MTV's! he's california born & been a fan since the 80s & must have taken advantage of the early custom-culture vans were reknowned for. something tells me we are only scratching the surface of weird's documented love for vans. 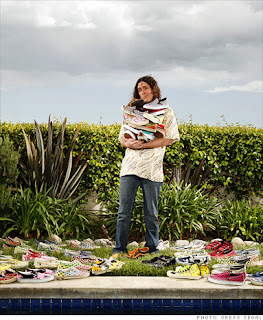 we are forever reinforcing metaphors of transcending to the next level/phase/paradigm of business & here's hoping links with celebrities the likes of kristen, kanye & weirdo facilitate the inevitability of which.
Posted by theothersideofthepillow at 10:48

what's (cooler than) the other side of the pillow?

we are stock hunters & collectors by trade. we scour the earth for deadstock rarities & deliver vintage heat which is.... as cool as the other side of the pillow! are you looking for something original & unique to set you apart from the crowd, or perhaps for something a bit more durable than your average modern re-interpretation? do you seek design-driven fashion made by hand with superior old-world production? well they don't make them like they used to... you dig?!?! we specialise in vintage footwear, eyewear & clothing however our passion is original VANS footwear MADE IN USA!

theothersideofthepillow
london, United Kingdom
this resource is now dormant & has been made redundant by our website www.pillowHeat.com which integrates blog, online shop & social media links. all items located here are still for sale unless marked by 'SOLD' tags & comments. selected stock is also still available through our big cartel online store. search the blog or scan the tags by brand, size or specification & email for pricing & purchasing details or to be add to the mailing list. we glady accept online payment by paypal & ship worldwide! 161b lower clapton road e5 8eq london UK thurs-mon 11:11-18:11 @pillowHEAT www.pillowHeat.com theothersideofthepillow@hotmail.co.uk +44 7988870508